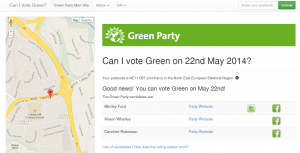 Commvia developed a GeoCoded data-driven application to help voters find who their local Green Party Candidate was in the European Elections.

As you will no doubt have noticed last month was the European Elections. While we may have been voting for the European Parliament for more than 30 years, they always seem a mystery to the average voter. So Commvia developed a web application called CanIVoteGreen.com to help demystify the European elections by putting people in touch with the Green Candidates in their area.

Simply by entering your postcode, the system listed all local and EU candidates who were eligible for your vote. The system went live on Wednesday 21 May – the day before poll and is still available now. Several tens of thousands individuals used the system to check out who their candidates were right up until the polls closed at 10pm on 22 May.

While the system itself was simple to use, there were more 30 million pieces of data stored to make its use possible. The government in 2011 allowed the database of postcode areas matched with grid reference, local ward, council and other political areas to become open source. While the data being freely available is good, actually using it is a little tricky.

Firstly, the raw data will not load in a spreadsheet as it has more lines than a spreadsheet Excel can address. So to work with it you need to load it into a database.

Finally, we needed to assemble the data for the candidates who were standing. The data needed to be normalised as their appears to be no single system for categorising the wards in local elections. There are at least three schemes available:

The Green Party data was coded using the final method and so a needed some manual data manipulation to change it to the latest GSS scheme.

Then it was simple a matter of adding a user interface and getting people to try it out. And try it out they did! The web application was featured on the Green Party website and was linked to from Twitter and Facebook by hundreds of Green Party voters and supporters.

And the answer to the question “Can I Vote Green?” was a resounding yes for almost every postcode search – a great result for the Green Party too.

If you’re interested in the how Commvia could help you in GeoCoding or Postcode Validating your data then why not get in touch?

If you’re interested in joining the Green Party or finding out more about what it stands for then visit the party websites for England and Wales, Scotland and Northern Ireland.