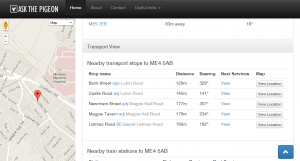 Gateshead, 30 July 2014 – Commvia is pleased to announce the launch of AskThePigeon.com into its formal beta release programme – a hyperlocal search engine that provides information about any specific local area for users in the UK. Using data sourced from a variety of open sources, AskThePigeon provides a unique picture of what a resident, visitor or a potential mover to an area might need to know – bus times, other transport links, local population, property prices, current properties for sale and local businesses, which are all provided from one simple search.

Andy Redfern, founder of Commvia and lead developer on the project, said “The idea came from my children asking me local information especially bus times. Using a bus timetable can be confusing so I created AskThePigeon to give a 2-click solution to when the next bus is. Now when they ask me for a bus time or a lift I can say ‘Ask The Pigeon and get the bus!’”.

Designed as a responsive Web App, the system works well on desktop, tablet and mobile devices. A geolocation tool allows you to search on your current location as well as the postcode for any area. The tool is now entering a formal beta programme to get feedback from users on the quality and accuracy of the data provided. Redfern added “With more than 1.7million live postcodes in the UK, it is impossible for us to test and check every page so we hope that people will give us feedback on what they find”.

Commvia has also launched a API interface to the data so that other developers can use the data in their own applications and websites. Redfern added “There are some talented people out there who I am sure can do some great things using this data – the API gives them a chance to try it out and get creative!”

AskThePigeon is the second project from Commvia using UK Postcode data. The company developed a Web Application for the Green Party in the run up to the European Elections in May 2014 called CanIVoteGreen.com. The site allowed visitors to check their postcode so see if they could vote Green and who their candidate was.

Commvia is a boutique digital agency based in Gateshead in the North East of England. It is focused on designing, developing and producing cost-effective ecommerce websites and launching innovative ideas using geocoded data sets. Set up in 2014 by Andy Redfern, the agency draws on many years of e-commerce and retail experience.

Andy Redfern has worked in online technologies for more than 20 years. He was the co-founder of EthicalSuperstore.com, which is now a profitable online business owned by the Spark Ecommerce Group. He is an accomplished programmer and skilled systems analyst with a pragmatic flare for getting the job done on time and on budget.